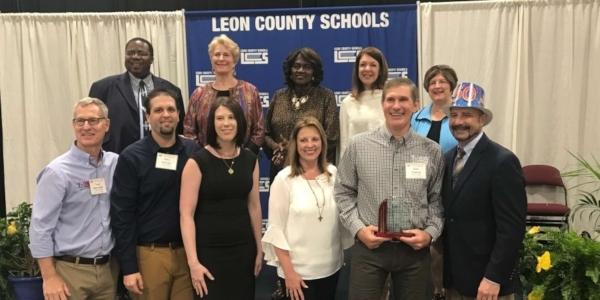 The company was honored in the large business category for its partnership to eliminate food deserts.

The Tallahassee Democrat reported that Tadlock Roofing was named the Outstanding Partner for Excellence for the 2018-19 school year in the large business category by Leon County Schools. The award recognition comes as a result of Amos P. Godby High School’s nomination of Tadlock Roofing after the two launched a partnership in July 2018 to combat food deserts in Tallahassee.

The company collected 2,000 non-perishable food items along with $2,000 that they presented to support the high school’s 2018-2019 food bank. Leon County is reportedly ranked fourth in the state of Florida for food insecurity.

Desmond Cole, principal of Amos P. Godby High School, told the Tallahassee Democrat, “After seeing first-hand the generosity of local business owner, Dale Tadlock, not only from a monetary standpoint but in getting the community involved with the effort and personally delivering 2,000 food items, there wasn’t any doubt of who we wanted to nominate for this award.”

The panty feeds about 25 families throughout the year who would likely go without food on the weekends. The schools celebrate the awards at their Annual District Volunteer, Mentor and Partner Recognition Event in front of an audience of 500+ people at the Civic Center each year.

This isn’t the first time the Coffee Shop has caught Tadlock Roofing doing good! We spotted them in 2017 for giving away a roof and again in 2018 for their work combating food deserts after the closing of two local grocery stores.

Do you know of someone in the industry who is ‘doing good deeds’ in their community? Help us catch them at it. Send news and information to info@rooferscoffeeshop.com