The Different Types of Bid Protests 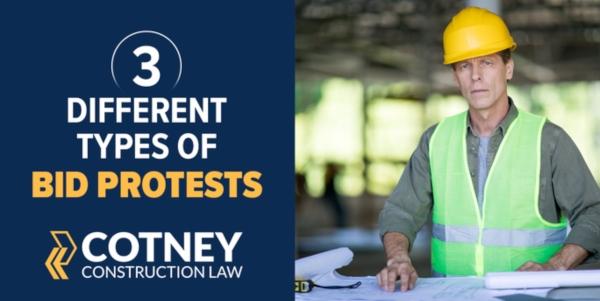 At some point, most construction companies will lose out on a bid.

If your company’s bid did not win, and after a requested debrief, you find that the awarding entity was not fair in the decision making, then you can proceed by protesting the bid. There are three types of bid protests: pre-bid protest, pre-award protest, and post-award protest.

Pre-award and post-award protests can both be successful if it can be proved that the agency held biased discussions with another company during negotiations, misunderstood your price, or awarded the bid based off of different criteria than what was named in the solicitation.

There are three main options for filing a protest: The contracting agency, the Government Accountability Office (GAO), and the Court of Federal Claims.

When a protest is filed with an agency, or even with the GAO, execution of the procurement will typically be suspended, regardless of whether the protest is filed before or after a contract award. When filing protest at the Court of Federal Claims, you have the option to inquire about a preliminary injunction against the agency.